This video shows the Garden Bros. Circus 3/27/2018 in Wildwood, New Jersey before Nosey’s Law became Law of NJ.
Because of such a law, this type of circus with Camels and Elephants and ALL Wild & Exotic Animals will never step foot in NJ ever again!
Nosey’s Law PROHIBITS all wild and exotic animals from traveling animal acts in the state. This law was a victory for the state of New Jersey as NJ was the FIRST state to pass a law encompassing ALL WILD and EXOTIC animals and not just elephants. Many states are following in this direction, but we need a national law.
TEAPSPA is a national law in process that will STOP circuses with animals NATIONWIDE!
We must support TEAPSPA if we are to STOP the abuse of wild and exotic animals across the nation.
HOW YOU CAN HELP:
Call your own state’s senators and representatives to educate them on the language of this bill and to ask them to support the bill by co-sponsoring.  S.3220 – 117th Congress (2021-2022): Traveling Exotic Animal and Public Safety Protection Act of 2021 | Congress.gov | Library of Congress

Circuses are STILL going on all over the country in many states RIGHT NOW in 2022.

This documentation was filmed by Free All Captive Elephants, who organized this Protest and Rally in Wildwood, NJ 3/27/18, in hopes of educating circus attendees about the horrific suffering of elephants. Elephants, Viola & Isa, traveled with the Garden Bros. Circus, handled by abuser Anthony Frisco, and owned by Carson & Barnes Circus. This video shows the elephants during intermission of the circus show where they use them to give rides for extra money. They are made to walk in tiny circles on hard concrete flooring.

Viola is obviously in distress, rocking and swaying. She was also dribbling urine onto her leg which causes scalding of her skin. She has a large mass of pink flesh protruding from her vulva. While performing her tricks in the ring, she is made to sit on this area on unsanitary surfaces.  In the video Frisco confronts the advocate, trying to get her to leave. These are the tactics used by circus personnel all the time. They are abusers and bullies. We stand STRONG and UNITED to STOP the suffering of animals in circuses.
Notice how handler Anthony Frisco uses the bull hook (heavy, sharp weapon in his hand), jabbing Viola behind her left front leg. Why? What was she doing that made him jab her?? (It is documented undercover that elephant handlers have said you must always make sure the elephant knows who’s boss.)
NOTE:
After this circus performance Anthony Frisco traveled on to other states with Garden Bros. Circus and was issued violations resulting in a bench warrant for his arrest: (Source: PETA)
October 2, 2018: Officials with the
Kentucky Department of Fish & Wildlife
Resources inspected Garden Bros. and
found that the elephant exhibitor, Carson &
Barnes Circus, had failed to comply with the
terms of its permit. Handler Anthony Frisco
was charged with four violations. He failed
to appear at his arraignment, and the court
issued a bench warrant for his arrest.
June 10, 2018: Independence (Missouri)
Animal Services charged elephant handler
Anthony Frisco with failing to provide two
elephants with adequate care and shelter.
They were forced to stand on asphalt in
direct sunlight in 89-degree weather without
access to shade. Camel and pony exhibitor
Joel Faulk and horse exhibitor Kambarov
Raiychbek Kozugulovich were similarly
charged. Faulk and Frisco later pleaded
guilty to lesser charges of littering.
Since this time, Anthony Frisco no longer handles the elephants and was demoted to selling concessions at the circus shows.
These are the types of degenerates that have control over these magnificent elephants.  It’s a disgrace. 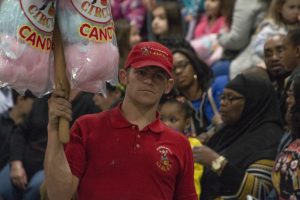 3/21/22
Since this documentation was taken in 2018, Viola & Isa are STILL on the road performing and giving rides. Thats four MORE long, grueling years. They don’t have much time left. Circus cruelty will cause them to suffer premature deaths. Life on the road for elephants often causes debilitating joint disease, foot rot, mental stress, and many other ailments, resulting in a life of pure hell. It’s animal brutality in it’s worst form.