It has come to our attention that defamatory statements are being made against Free All Captive Elephants by its former President, Barbara Lovett.  Though we strive to work collaboratively with all organizations whose missions ultimately are geared towards making the world a better place for all animals, recent events have put us in a position where we need to set the record straight about our origins. 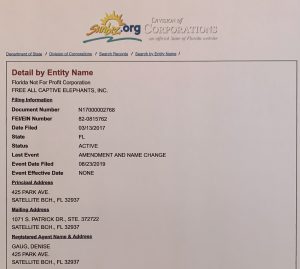 Free All Captive Elephants was formerly known as Save Nosey Now, Inc.

This is a legal fact that cannot be disputed and is clearly shown here on the State of Florida’s Division of Corporation’s website.

If you scroll down to DOCUMENTED IMAGES and open the documents starting from 2017 to the most recent you will see the entire history including the date of incorporation when Barbara Lovett was President, and the amendment to change our name from Save Nosey Now, Inc. to Free All Captive Elephants, Inc. 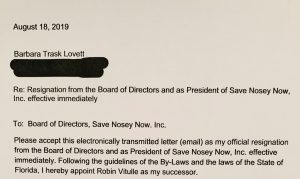 Prior to her resignation, the organization was exploring the possibility of contracting with Network for Good (NFG) to assist us with fundraising. This service cost approximately $4000 per year. The decision to enter into this contract was put to a vote by the Board of Directors. The Board overwhelmingly voted in favor of contracting with NFG for one year. At that time, Ms. Lovett was President of what is now known as Free All Captive Elephants, Inc. FACE. Our bylaws dictated that, as President, she was to sign this contract. However, she refused because, as she outlines in her resignation letter, she did not feel that doing so was “fiscally responsible.”  Ms. Lovett called the Board Members who voted in favor of contracting with NFG unethical and accused us of acting in bad faith.

It became apparent that the Board of Directors could no longer work together to successfully advance our mission, prompting Ms. Lovett’s resignation. Immediately following her resignation, and without any warning, Ms. Lovett took the following actions:

These two critical actions left the remaining FACE Board Members with no alternative but to create a new Facebook page and a new website. Free All Captive Elephants.

Because of the above situation, as well as the fact that Nosey was in sanctuary, it made no sense to continue on as Save Nosey Now, Inc.. We also agreed that due to our success with Nosey, we wanted to help save other elephants in captivity. For these reasons, the remaining Board members voted to change the name from Save Nosey Now, Inc. to Free All Captive Elephants, Inc. (FACE).  All of the name change paperwork was filed with the State of Florida and is public record. 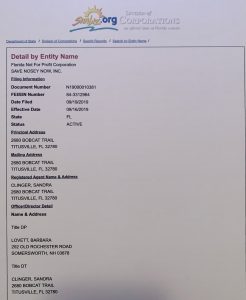 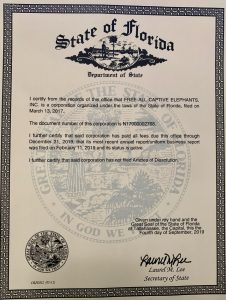 Please note the EIN number (assigned by the federal government) and the document numbers (assigned by the state) are the same for FACE and the Save Nosey Now Inc. that was incorporated in 2017, NOT Ms. Lovett’s NEW organization of the same name.

We became a nonprofit so that we could legitimately raise funds to further our mission. By virtue of becoming a nonprofit and collecting funds, it opens an organization up to scrutiny. In order to adhere to best practices and IRS guidelines, utilizing a professional fundraising service and processing company makes good sense. It helps avoid even the appearance of impropriety. After being fully vetted by Network For Good, (NFG), FACE, ultimately signed a one year contract in January 2020. This has proven to be a very smart decision. In fact, it helped us survive the pandemic unlike so many other small nonprofits, we made it through 2020.

The help we received from NFG has been so advantageous, that we signed another contract starting in January, 2021. 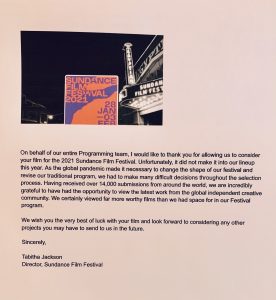 Our documentary BROKEN is complete and was submitted to the Sundance Film Festival in June of 2020.

On December 4, 2020, we learned that we were not accepted into Sundance. A very small percentage of applicants are accepted.  ​​Though we were disappointed, we knew it was a longshot because the competition was fierce. We also knew we had to give it a shot. Sundance requires films be world premieres, so we were not permitted to release the film prior to receiving this notification.

Our next steps will involve bringing BROKEN to the world by other means as soon as possible. We know many are waiting impatiently to see this ground-breaking documentary that exposes the circus under-belly and the government agencies tasked with protecting the animals.

Nosey’s life in the circus and her miracle rescue to sanctuary are chronicled in BROKEN.

“In a previous post in an impetuous moment and out of anger I called the documentary “Broken” hideous, although I have never seen the film and have no knowledge of the contents. Furthermore, I will refrain from any further comment regarding the documentary.”

Ms. Lovett continues to this day to use the Save Nosey Now Facebook page along with much of the copyrighted material owned by FACE. FACE has made several requests through our Attorneys to cease and desist.

*** No donated funds were used for attorney’s fees.  Our attormeys are representing FACE on a pro-bono basis.*** 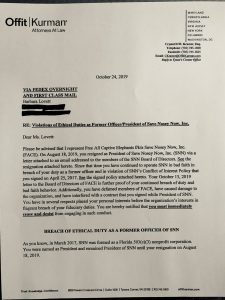 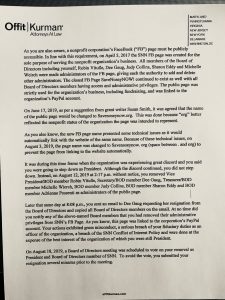 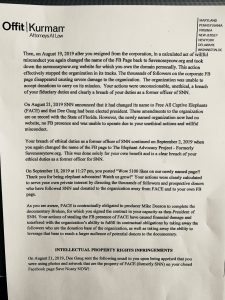 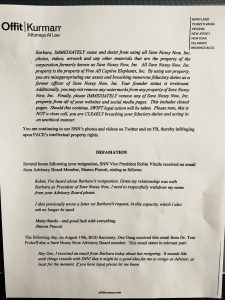 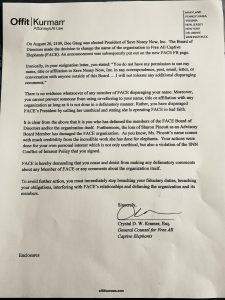 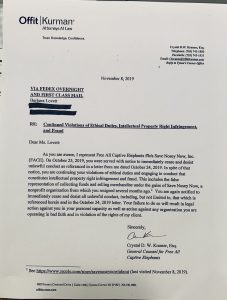 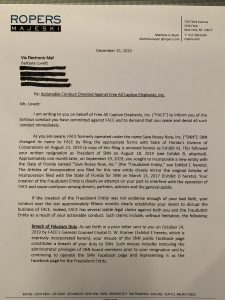 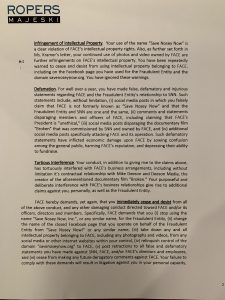 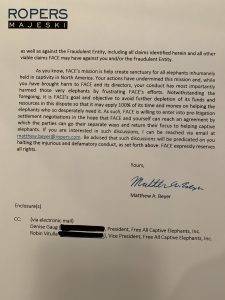 We at FACE have never publicly disparaged Ms. Lovett personally, The Elephant Advocacy Project or the NEWLY formed Save Nosey Now, Inc. nor have we ever willfully infringed on any of their intellectual property rights (copyrights, etc.).  However, we can no longer be silent given what we have learned. We are deeply saddened by Ms. Lovett’s actions as they are counterproductive to our mission of getting captive elephants in North America to accredited sanctuaries and to the entire animal advocacy movement as a whole.

We also greatly value transparency. Free All Captive Elephants is very proud to have achieved our GuideStar Gold Seal of Transparency. We strive to follow the very sacred guidelines in place for non-profits and highly respect these rules. We take every grant, donation and gift of support very seriously as we know those giving are doing so out of the goodness of their hearts to help elephants gain freedom to sanctuaries accredited by the Global Federation of Animal Sanctuaries, (GFAS).