City Council approved the ban in a 7-5 vote after nearly two hours of debate and public comments.
Read more:  Link to full article
Dear Mayor Lyles, City Councilpersons, City Attorney, City Manager, and City Clerk:
At Free All Captive Elephants, Inc. we support a FULL BAN on wild and exotic animals. What is the purpose of a bull hook ban that is not clearly written or enforced? It is left up to interpretation and often is very “gray” in nature.  The purpose is convoluted and often does not carry out the purpose of the intended ordinance.
Please consider enacting a “Nosey’s Law” S1093, type law, passed in New Jersey in December of 2018, where wild and exotic animals are prohibited from performing in traveling animal acts. Not only New Jersey, being the first state to enact such a law, but many other states, towns, cities and counties have enacted laws to prohibit wild and exotic animals from traveling animal acts.
https://www.njleg.state.nj.us/2018/Bills/PL18/141_.HTM
This law was implemented to protect wild and exotic animals from the inherent abuse while traveling with circuses throughout New Jersey. It should be a federal law given the documentation of proof via undercover video of these traveling circuses of the many violations of the Animal Welfare Act. The violations continue to mount as there is little to no inspection and enforcement by the agencies in charge to protect the animals and uphold the law. It is up to individual states, cities, counties and towns to enact laws to protect not only the wild animals but also the public that stands to be harmed by injured, stressed and traumatized animals. It is only a matter of time before a tragic accident happens again. The age-old practice of dragging wild elephants, tigers, lions, bears, camels and other animals in circuses is very near its end as the public is continually informed of the actual treatment of these animals and has chosen to stop supporting by patronizing these shows. The circuses that remain are suffering with lack of money to take care of their animals.  Recently on September 23rd, 2021, George Carden of Carden International Circus relinquished his bull elephant Bo to a sanctuary in Georgia because of the cost of his care.  He said as much in a live FB video aired on September 23, 2021 on the Elephant Aid International FB page.  He sees the writing on the wall for the future of circuses.
Listen to him talk after Bo’s arrival at the sanctuary:  https://fb.watch/8gOYeYq208/
The bull hook is an instrument of pain and fear to these animals. They have been trained to fear this instrument behind the circus curtain on a continual basis with severe beatings daily for many years. When the circus owners tell you it is merely a tool to “guide” the elephants, they omit the fact of what caused these majestic, intelligent, sentient and amazing animals to fear this instrument to begin with. They don’t show how the bull hook is actually used.  We know, and the public is learning, thanks to dedicated grass roots advocates.
The time is NOW to force a change for these animals. As a city, you can join the many states, cities, towns and counties that have already taken a stance.
Please pass an ordinance to BAN WILD AND EXOTIC ANIMALS from traveling animal acts in Charlotte, NC.   It’s the right thing to do.
Thank you,
Robin Vitulle – President and Co-Founder
Free All Captive Elephants, Inc. FACE 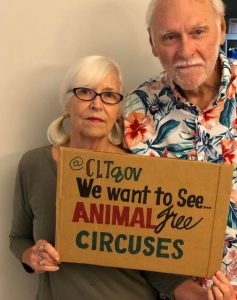 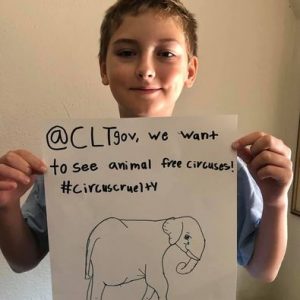