Performing elephants are denied all that is natural to them and are forced to endure beatings, electric shock, food and water deprivation and intimidation.

Article by Free All Captive Elephants

This article was produced by: Earth/Food/Life a project of the 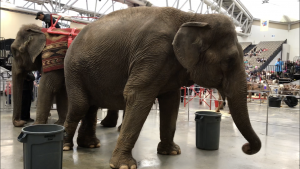 No matter what political views or affiliations people in the United States might have, most of them would agree that animal abuse is just plain wrong. Animals kept in captivity or forced to perform in circuses are subjected to some of the worst kinds of abuse. Among all these animals, however, elephants suffer the most in captivity as they are highly intelligent and social beings, according to experts, and have complex physical and social needs that cannot be met in any circus or zoo environment.

“Elephants who are kept in small enclosures are in increased danger of developing chronic foot disease and arthritis, both of which lead to frequent instances of death for captive elephants,” according to Dr. Toni Frohoff, a biologist and behavioral ethologist. “In fact, the most common reason for premature death of captive elephants is lack of space and standing on hard and/or otherwise inappropriate surfaces.”

Many people are unaware that circuses are still part of the American culture. The closing of the infamous Ringling Bros. and Barnum & Bailey Circus in May 2017 did not mark the end of cruelty perpetrated on elephants, who are forced into captivity and made to perform in circuses. Between 25 and 30 traveling circuses, which include caged wild animals, continue to travel and operate in the United States…

This article was produced by: Earth/Food/Life a project of the Independent Media Institute – Published July 29th, 2021